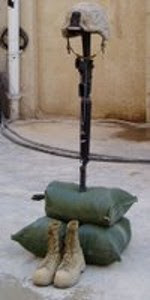 Petty Officer 1st Class Gilbert Minjares Jr., 31, of El Paso, Texas, died Feb. 7 in the helicopter crash in Al Anbar Province, Iraq.
Doc Minjares was assigned to Marine Aircraft Group 14, 2nd Marine Aircraft Wing, Cherry Point, N.C. He was a married father of two children, one only a month old, and had been in Iraq only a week.
Semper Fi
Posted by Harold/AQ at 10:17 AM

I will miss Gil. We both were stationed at US Naval Hospital Guam. He was a big brother to me. I'm currently in North Carolina myself awaiting to class up on Field Medical Service School (FMSS) since January this year. I wish I could have talked to him or seen him at Cherry Point before he deployed. He will be missed. Thank you for everything Gil...

And now his wife must raise his children without him -- and they have to miss out on having their father. So sad.

I just learned of Gil's death and took a moment to pray for his family. I was stationed with Gil at the Naval Hospital of Guam and remember him as a loving, good humored man. Thinking of his family during this trying time.

Gil, there were so many good times we shared when we were stationed in Guam. I will really missed these times. I remember my going away party in downtown Tumon. You also gave me a disc with pictures of my last night in Guam. I remember when you took care of Tommy when he was in the hospital. Bro, I never met your family but i hope that they know that there are alot of us who remember you. everytime the guys get together. we talk about you. you take care. i will truly miss your friendship.
Always,
Richie Tan
HM2 (FMF) Tan

I will miss you. You were a great friend. You showed me the ropes on the USS Nassau when we deployed together and you were a great roommate.
I am very very depressed and deeply hurt that this has happened.
I will always remember you and the good times we had.

I also served with Gil aboard USS NASSAU. He was the "Doc" I always asked for at medical. He was great to hang out with on liberty and talk to. He was quick to smile and made time to listen. My heart goes out to his wife and kids. We lost touch after Nassau, but that doesn't lessen the sting of totally losing an old frind and shipmate. Go with God brother.

There is not a day that passes by that I dont think about you. Everyday I serve in the NAVY is because of you. You helped me get in with all your connections in El Paso when i couldn't get in the NAVY. When we where in Guam together for the first time in our Naval Careers that was the best time I ever had and to tell you the truth you made me realize what family is all about when i was there. You have done so much for me when I needed it the most. When I was living like hell in El Paso and I was kicked out of my house with no job. You picked me up back on my feet and showed me that there is more out there in this World and that I need to strive for it in the NAVY. It is because of you that I now talk to my Mom & Dad, and it is because of you that the family is back together just the way you wanted it to be. At your roserie a lot of the family went up to say there good byes and say what they had to say about how crazy you are, to how you and Uncle Henry sang together Drunk, but to me I didnt want to say my good byes and not give my speech only because i still need you here with me, to mentor me, and to protect and guide me through my upcoming tour in Iraq. I ask for your help for the last time. Help me in getting back to our wonderfull family. That is all I ask and since your watching over us I think you can make it happen.

A lot has happened since the last time I had seen you in Guam. I kinda went against your word and got married but she is the world to me, just like your family is to you. I also became a Petty Officer Third Class and I finally left the Ship and became a Seabee just like you told me to be cause that was my calling. Now that I think of it, You had a skill for knowing how people are and for knowing what people wanted. That is why you where such a good a recruiter and Cousin to me.


I Love You and Forever will you be in my Heart.

Thank you all for your kind words and sharing these great memories of my brother with us. Feel free to email me to share additional thoughts. lilfruits@hotmail.com

Gil, my brother told me about your passing the other day. He asked me " Did you know Gilbert Minjares from the Nassau?" Of course I said yes. I thought you were stationed with him and you had ran into each other, then he told me. I was actually looking for you on myspace because we had lost touch. I am thankful for all the years that I knew you and I know that you were one of the proudest service members I ever met. I remember when we would have inspection and your shoes were like black glass. I am honored to have known you and will keep your memory proud.

I had always hoped to see you and thank you for helping me join the Navy and become your shipmate. Now that I am following on your footsteps as a Navy Recruiter I will take pride as a Recruiter andchange the lives of others for the positive and pride of being in the Navy.I will never forget my first shipmate in the Navy.

I was stationed with Gil in Guam. He was so great to everyone he knew. I was also in Iraq when this happened. There were so many of us that knew him that were there. No one could believe it. We miss you so much. Thanks for everything. Thanks for the great memories.

What a guy.... he had so much advice for me. The last time I spoke with him we had an argument over a job position in Guam. He had more experience and should have been given the spot instead of me. It goes to show that last words are always important and never leave them in bad terms. I had much respect for him and was proud to serve everyday that I did with him. God be with his family and friends.

What a guy.... He had so much advice for me. The last time I spoke to him we had an argument over a job position in Guam. He had much more experience than I and deserved the spot. It goes to show that last words are very important and you can never change them. I am proud to say that I was able to serve a long side of him. God bless his family and friends.

Although it's been over 5 years now, I still remember my LPO and buddy from Guam, HM1 Minjares. When I learned of his death from one of one of my shipmates, I was in complete disbelief as I had just returned from OIF 06-08deployment in November of '07. I met Gil while stationed in NH Guam, standing duty in the admissions department. He was the one of most decorated corpsman I had the privilege of meeting, up until that time. He had the most unique qualities of being both laid-back and influential, simultaneously--leadership qualities that I have yet to find in anyone else I have worked for. His friendship is missed and will forever be remembered...

Gil and Manny didn't die in a helicopter crash; they were transporting blood supplies when they're helicopter was struck by 2 surface to air missiles.

RIP HM1. I still remember when you left. Now that I have 2 kids of my own, I have an idea what you were leaving behind. The mission you were fulfilling was a valiant one and I am sure that others returned home because of what you and the other CASEVAC corpsmen were sent to do. God bless. Robert Fish (formerly LCDR MC FS, MAG 14).

Harold/AQ
I'm of the Class of '65, but I seem to have missed most of the fun of that... largely due to the needs of the Navy and the United States of America. Now I try to see if I can make sense of what you people are doing, and how I might contribute where appropriate. Views expressed herein are solely mine and are seldom shared by anyone.